Nov 14, 2022 | View Case Page
Class-action lawsuit says those renting in affected areas since 2016 have likely been victim to an antitrust agreement among 10 local leasing companies

SEATTLE – Renters in Seattle’s downtown core have filed a class-action lawsuit accusing 10 major leasing companies of an unlawful agreement to artificially inflate the price of residential real estate in the area, driving up rents in some of Seattle’s densest neighborhoods, according to Seattle law firm Hagens Berman.

If you currently rent a Seattle apartment maintained by one of these companies or did so since 2010, you may have paid artificially inflated rent prices and may be affected. The lawsuit states the price-fixing affected the central neighborhoods of Seattle, including Downtown Seattle, Capitol Hill, the Central District, South Lake Union, Queen Anne and Belltown, which include most of the city’s densest neighborhoods.

The lawsuit follows a similar case filed by Hagens Berman earlier this month on behalf of college students renting near campuses in college towns, affected by similar rent-fixing agreements among housing management companies.

The lawsuit quotes confidential witnesses who have stepped forward to share information about the scheme. Employees at Greystar in Seattle would regularly perform market surveys in which they would call competitors to get rental pricing, then submit that data to their managers. One witness quoted in the lawsuit states: “It was price-fixing… what else can you call it when you’re literally calling your competition and changing your rate based on what they say?” Another unnamed witness states that Defendant employees would call each other two to three times a day to obtain detailed information regarding pricing.

“Anyone who’s played the rental game in Seattle knows that prices have become astronomically high, and leasing companies would rather have the public believe it’s entirely due to honest supply and demand,” said Steve Berman, managing partner at Hagens Berman representing the proposed class of Seattle renters. “Here, we believe we’ve found a smoking gun indicating that’s just not the truth.”

RealPage’s platform and algorithm provided an unprecedented method for lessors to track competitors’ rents and collude to respond to changing rates in real time, in lockstep, the lawsuit says. “In approximately 2016, more and more Lessors replaced their independent pricing and supply decisions with collusion by adopting a common revenue management program-thus artificially manipulating the forces of supply and demand to their favor.”

“This rigged game has all the markers of a classic antitrust,” Berman said. “A few key players in a single space agreed to act in unison with the clear understanding that all parties take part in the scheme. This kind of wink-and-nod behavior is a red flag that price control may be present in the market.”

According to the lawsuit, RealPage provided the platform and the algorithm for collusion through a software called YieldStar, which granted the lessors unprecedented ability to “track your competition’s rent with precision.” Lessors involved in this scheme submitted data including rents charged for each unit and each floor plan, lease terms, amenities and move dates. The lawsuit says that based on public data, both average and median advertised rents for Seattle properties leased by the 10 defendants are consistently higher than those operated by other companies. While RealPage reports that annual rental growth in the Seattle-Bellevue-Everett market averaged 3.25% over the past five years, it also advertises its software as able to “drive up to 400% year-one ROI.”

“Through its illegal sharing of data across the market, RealPage even managed to outperform in market downturns including the 2008 housing market crash and the COVID-19 pandemic,” Berman said. “When our antitrust team sees numbers like this, we know to be suspicious.”

The lawsuit seeks repayment to those who have been charged increased rent prices due to this scheme and also seeks to hold the companies liable under federal antitrust law, the Sherman Act, under which damages may be multiplied punitively.

Find out more about the rent-fixing class-action lawsuit on behalf of Seattle renters. 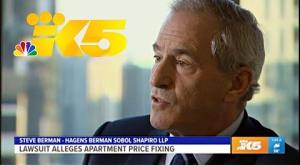 Do you or did you since 2016 rent a Seattle apartment maintained by one of the following companies: Greystar, Trammell Crow Residential, Avenue5, Equity, Essex, FPI, Lincoln, Security Properties, AvalonBay or Thrive?