SEATTLE – A new antitrust class-action lawsuit accuses Apple Inc. and Amazon.com of colluding to raise the price of iPhones and iPads, according to Hagens Berman, the law firm representing consumers against two of the world’s largest companies in today’s filing.

The lawsuit, filed in the U.S. District Court for the Western District of Washington accuses Apple and Amazon of seeking to eliminate third-party Apple resellers on Amazon Marketplace in a scheme to stifle competition, and maintain premium pricing for Apple products. The class action alleges an “unlawful horizontal agreement between Apple and Amazon to eliminate or at least severely reduce the competitive threat posed by third-party merchants,” which attorneys say violates federal antitrust laws and has cost consumers.

If you purchased a new iPhone or iPad from the Buy Box on Amazon.com, you may have overpaid and may be entitled to compensation under consumer-rights laws.

The consumer-rights law firm behind the filing has bested Apple in multiple antitrust lawsuits, including a $400 million settlement related to  price-fixing of e-books and a $100 million settlement on behalf of iOS developers harmed by App Store policies. Hagens Berman has also brought multiple pending antitrust cases against both defendants.

The lawsuit centers around an agreement made between Apple and Amazon that took effect at the beginning of 2019, the existence of which neither defendant denies. The agreement permitted Apple to limit the number of resellers operating on Amazon’s marketplace, and it offered Amazon in return a discounted wholesale price for a steady stream of iPhones and iPads, allowing it to reap the benefits of limited competition on its own reseller arena.

“From the outset of these discussions, the parties discussed ‘gating’ third-party resellers,” the lawsuit states. “Ultimately Apple proposed, and Amazon agreed, to limit the number of resellers in each country to no more than 20. This arbitrary and purely quantitative threshold excluded even Authorized Resellers of Apple products.”

“When our antitrust trial team reviewed the numbers behind this lawsuit, we very quickly noticed several red flags. Suddenly losing 98% of sellers of a particular product is genuinely unheard of, especially when the product at hand is made by the world’s largest tech company and sold by the world’s largest retailer,” said Steve Berman, managing partner at Hagens Berman representing the proposed class of consumers. “Apple and Amazon both stood to benefit from this anticompetitive agreement and they entered it knowing it would harm the public.”

According to the lawsuit, available data indicate that there were at least 100 unique resellers offering iPhones and at least 500 resellers of iPads on Amazon’s platform before the agreement, and after, no more than seven remained, a decrease of 98% of third-party Apple product resellers. The lawsuit references that Amazon admitted to Congress that it entered an agreement with Apple that permits only “seven resellers of new Apple products” on its platform.

Prior to the antitrust agreement, Amazon was a highly competitive marketplace, featuring numerous active third-party resellers offering genuine Apple products at prices steeply discounted from the prices Apple wanted to sustain on its online storefront, according to the lawsuit, and most Apple product marketplace sales were going to third-party resellers (rather than to Amazon itself). All of this benefited consumers in the form of lower prices and differentiated offerings, attorneys say, but this structure threatened Apple and Amazon’s bottom line.

“When Apple and Amazon renewed their existing reseller agreement in 2019, the only losing party to their plan was consumers, who were blindsided by the price increases,” Berman said. “Where consumers used to be able to find discounted prices of upwards of 20% for iPhones and iPads for sale on Amazon Marketplace, now they get locked into Apple’s premium pricing.”

The lawsuit seeks reimbursement to consumers who overpaid for iPads and iPhones affected by the scheme, as well as an injunction that prevents the scheme from continuing.

Find out more about the class-action lawsuit against Apple and Amazon for price-fixing of iPads and iPhones purchased from Amazon.com. 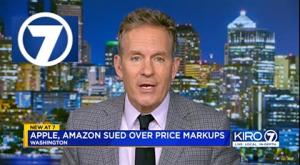 A new antitrust class-action lawsuit accuses Apple Inc. and Amazon.com of colluding to raise the price of iPhones and iPads.