SAN JOSE, Calif. – iOS developers today hit Apple with a class-action lawsuit claiming the tech giant has cornered the iOS app market with its App Store and knowingly used its monopoly to implement “profit-killing” commissions and fees on the very developers who bring Apple’s products to life, according to attorneys at Hagens Berman.

The lawsuit filed in the U.S. District Court for the Northern District of California in San Jose regards Apple’s allegedly anticompetitive practices in mandating only one app store for iOS devices, which sets the stage for Apple to abuse its market power. For 11 years, Apple has instated a 30 percent commission rate on all app paid sales conducted through the App Store and on any in-app purchases made in iOS apps. Apple also charges high commissions on subscriptions purchased in-app.

If you are an iOS app developer who sold an app or in-app digital product through Apple's App Store, you may have rights to reimbursement for the charges and fees imposed by Apple. Find out more.

In addition to the 30 percent cut taken from all app sales and in-app purchases, Apple also sets an artificial minimum pricing mandate of $.99 for paid apps or in-app products. It also dictates that all App Store paid purchases end in $.99.

Apple also forces developers selling products through the App Store to pay an annual Apple Developer fee of $99 to distribute their apps, which is especially damaging to smaller and new developers. Putting all iOS apps into one marketplace also means consumers never see most apps, attorneys say, stifling competition and innovation. According to a legal filing made by Apple last year, there were at that time more than 2 million apps available on the App Store.

“Between Apple’s 30 percent cut of all App Store sales, the annual fee of $99 and pricing mandates, Apple blatantly abuses its market power to the detriment of developers, who are forced to use the only platform available to them to sell their iOS app,” said Steve Berman, managing partner of Hagens Berman and attorney representing the proposed class of developers. “In a competitive landscape, this simply would not happen.”

“This isn’t the first time we’ve taken Apple to task over anticompetitive behavior,” Berman added. “We have successfully held Apple to the law in the past, and we intend to fight hard for the rights of iOS developers who bring their hard work and creativity to the iOS App Store with the hope of fairly monetizing their creations.”

Today’s lawsuit seeks to force Apple to end its abusive monopoly and allow competition in the distribution of iOS apps and related products, to get rid of its pricing mandates, and to reimburse developers for overcharges made through abuse of its monopoly power.

“Apple admits that it shuts out all competition from app-distribution to iOS device consumers, ostensibly to protect its device customers from bad apps and malware,” the suit says. “But this is overblown pretense. There is no reason to believe that other reputable vendors, including Amazon, for example, could not host an app store and provide a trustworthy app-distribution system if Apple were to open up its system to other providers.”

“We think app developers should be rewarded fairly for their creations, not over-taxed by a corporate giant,” Berman said. ”After 11 years of monopoly conduct and profits, we think it’s high time that a court examine Apple’s practices on behalf of iOS app developers and take action as warranted by the law and facts.”

Read more about the class-action lawsuit against Apple on behalf of iOS developers. 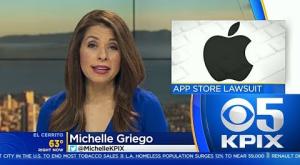 iOS developers hit Apple with a class-action lawsuit claiming the tech giant has cornered the iOS app market with its App Store.