NEWARK, N.J. – An amended class-action lawsuit filed against BMW details an illegal emissions-cheating system installed in tens of thousands of its diesel vehicles to mask pollution up to 27 times the legal standard, in similar fashion to Volkswagen’s Dieselgate scandal, according to law firm Hagens Berman.

The lawsuit states BMW X5 and 335d models promised by BMW to “protect the environment every day” actually contain a manipulative software that masks illegally high levels of pollution while undergoing emissions testing. The suit was originally filed in March 2018 in the U.S. District Court for the District of New Jersey and states collusion between Bosch and BMW amounts to racketeering, in violation of the Racketeer Influenced and Corrupt Organizations Act.

In June, the court granted BMW and Bosch’s motions to dismiss, in which Judge McNulty expressed concern that allegations against the companies rely on testing of a single vehicle. The court dismissed the complaint but allowed the opportunity to file an amended complaint following additional vehicle testing.

“Our firm has conducted extensive and exhaustive testing, and all five of the BMW models we tested outright failed,” said Steve Berman, managing partner of Hagens Berman. “We look forward to continuing this case against BMW and Bosch to reveal the full scale and scope of the emissions cheating present in the X5 and 335d models.”

“When BMW promised these vehicles to be ‘better for the environment,’ ‘clean’ and emissions compliant, it was clearly just blowing smoke,” he added.

The firm independently tested five diesel-powered BMWs to measure emissions performance for comparison with certification testing and certification standards, according to the lawsuit. On-road, real world emissions were measured with a PEMS. Laboratory emissions were measured with a Code of Federal Regulations-compliant chassis dynamometer running the applicable city driving test, and highway certification cycles, two of the main cycles used to certify the vehicles with CARB and EPA. In addition, on-road testing was also performed on an equivalent gasoline vehicle for comparison with the diesel vehicles.

“The diesel vehicles were found to have a defeat device that causes a dramatic increase in NOx emissions when operating at ambient temperatures less than 68°F, which happens to be the lower allowable laboratory temperature limit for the certification test cycles. At low ambient temperatures, NOx levels are as high as 2,365 mg/mile, or 34 times the standard,” the lawsuit states.

Despite BMW promoting these vehicles as having “exemplary fuel economy,” the complaint states, “…all five diesel vehicles were found to have active diesel particulate filter (DPF) regeneration rates higher than the levels submitted in the applications for certification. As a result, there is a significant increase in NOx and a loss in overall fuel economy.”

The lawsuit seeks damages, injunctive relief to end the sale of the affected X5 and 335d models, and equitable relief for BMW’s misconduct related to the design, manufacture, marketing, sale and lease of its illegally polluting cars.

Find out more about the class-action lawsuit against BMW. 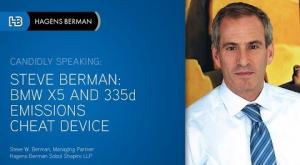 Despite BMW's eco-friendly promises, its vehicles contain an emissions-cheating device and emit harmful pollutants at amounts beyond legal limits.