“We are very pleased that Judge Ludington has sustained the claims for thousands of consumers who unknowingly bought or leased polluting vehicles, and we look forward to continuing our vigorous efforts to recover benefit-of-the-bargain damages for these injured consumers,” said Steve Berman, managing partner of Hagens Berman and counsel representing Cruze owners in the suit.

“Diesel emissions fraud didn’t stop with Volkswagen or Mercedes – GM has proven that it too placed greed and profits ahead of thousands of owners who paid premium prices for what they thought were clean diesel cars,” Berman added.

Hagens Berman’s automotive litigation team represents consumers as a member of the court-appointed Executive Committee in the Dieselgate case against Volkswagen, Audi and Porsche as well and as lead counsel in a similar case brought against Mercedes for using “defeat device” software to cheat emissions tests.

According to consumers, the defeat device installed in Chevy Cruze models results in significantly higher emissions when the vehicle is in use compared to when it is being tested in laboratory conditions. The lawsuit states that GM marketed the Cruze diesel as “a Clean Diesel” that had emissions below U.S. environmental standards and charged an additional $2,000 or more compared to the gasoline model, but misled the public and sought to evade emissions testing. 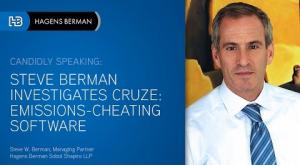