DETROIT – An amended class-action lawsuit against Fiat Chrysler includes harrowing photos of Chrysler Pacifica hybrid vehicle fires spurred by a defect that Hagens Berman attorneys call a “nightmare situation” for Pacifica owners, and one Fiat Chrysler attempted to conceal, according to the lawsuit.

The amended lawsuit was filed Mar. 25, 2022, in the U.S. District Court for the Eastern District of Michigan and accuses Fiat Chrysler of selling dangerously defective vehicles prone to catching fire and exploding, breaching implied warranties and failing to act more quickly in disclosing and providing a remedy to the defect in the hybrid propulsion system.

The defect renders the owners unable to charge their hybrids, forcing them to depend on expensive gasoline when they bought their cars specifically to avoid having to pay for gas and be subjected to its price increases.

So far, all vehicles that reportedly caught fire were parked and turned off, and most were plugged in and charging, according to the lawsuit. In the recall report filed with the National Highway Traffic Safety Administration (NHTSA), Chrysler said the “root cause is unknown.”

“The catastrophic fire risk is the direct result of a defect long known to, concealed by, and still unremedied by FCA,” the lawsuit states. “Not only did FCA conceal the defect from consumers, but it also concealed its consequences, including the serious safety hazards and monetary harm…”

If you own a 2017-2018 Chrysler Pacifica plug-in hybrid electric minivan, you may be affected by this dangerous defect and may be entitled to compensation. Contact Hagens Berman to find out more about this issue and your consumer rights against Fiat Chrysler.

“This defect places drivers and passengers in a nightmare situation, and all that Fiat Chrysler has done so far is shrug at the threat of random, spontaneous vehicle fires affecting its own customers,” said Steve Berman, managing partner of Hagens Berman and attorney representing Pacifica owners in the lawsuit.

“To add insult to injury, the owners of these cars – which were purchased expressly to avoid paying high prices for gasoline – are now completely unable to use the electric power of their hybrid and are subjected to huge prices at the pump,” Berman added.

The lawsuit states, “The Hybrid Propulsion Defect exposes putative class members to an unreasonable risk of accident, injury, death, or property damage in the event that their vehicle catches fire while in operation or, perhaps more commonly, spontaneously ignites while the vehicle is parked at the class member’s home, on a public street, or in a public parking lot.”

NHTSA recommends owners of Chrysler Pacifica hybrid minivans should stop charging their vehicles and should not park them inside or near other cars or structures. This instance of Pacifica fires marks the third time Pacifica hybrids have been recalled for fire risks.

The lawsuit contains the details of 14 plaintiffs’ experiences with the Pacifica hybrid propulsion system defect, including being forced to pay for gas in the absence of ability to safely charge their vehicles, and living with a constant concern about the safety of driving their hybrids. All state that had they known about the defect, they never would have purchased the Pacifica hybrid.

The lawsuit seeks compensation for Pacifica owners for Fiat Chrysler’s conduct, and for loss of value of their vehicles due to rampant, repeated recalls related to vehicle fires. The class action brings claims of unjust enrichment and breach of warranty.

Learn more about the lawsuit against Fiat Chrysler for Pacifica hybrid fires. 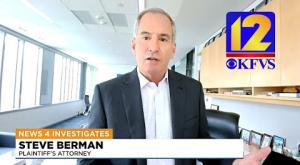 Own a 2017-2018 Chrysler Pacifica plug-in hybrid electric vehicle (PHEV)? Have you been sent a warning to park your vehicle outside and away from structures and not to plug in your vehicle, due to fire risk? A hazardous defect means your vehicle could catch fire even when the engine is turned off. You may be entitled to reimbursement.