2018-2020 Ford F-150 and 2019-2020 Ranger trucks don’t comply with federal regulations causing you to pay more money in extra fuel costs. Other models may be affected. You may be entitled to compensation or a buyback. Fill out the form to find out your consumer rights to potential compensation » 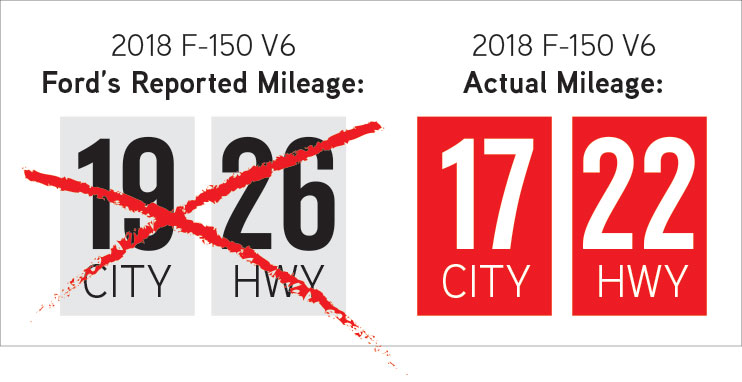 According to recent reports, 2018-2020 Ford F-150 trucks and 2019-2020 Ford Ranger trucks do not achieve the fuel economy ratings posted on the window stickers and advertised by Ford. This could be costing you extra in vehicle fuel and lead to drastically reduced MPG and higher emissions levels. Owners may be paying up to $2,000 more in fuel over the lifetime of their affected vehicle.  If you own a Ford truck, fill out the form to find out your consumer rights to compensation.

The class-action lawsuit filed against Ford seeks to represent all owners and lessors of 2018-2020 Ford F-150 trucks, 2019-2020 Ford Ranger trucks and other affected vehicles. The F-150 is similarly failing to measure up to its advertised mileage, and we believe owners of Ford F-150 trucks are overpaying fuel costs due to the trucks’ failure to comply with federal regulations. The lawsuit states that the class of Ford truck owners is likely to be expanded and could potentially include all Ford vehicles certified for sale in the U.S. for a number of years.

Ford used the fuel efficiency ratings as a selling tool to entice consumers into purchasing the 2019 Ford Ranger claiming that it “is the no-compromise choice for power, technology, capability, and efficiency.” Ford knew that to sell the Ranger, it had to tout it had fuel-efficiency, and a promise that was important to consumers. We believe it similarly marketed its F-150 trucks.

The suit says Ford deceived consumers in calling its Ranger “fuel efficient,” and that without manipulating its testing procedures and ignoring common road conditions, Ford could not achieve the fuel economy and range it promised, meaning Ford owners end up paying more for fuel.

The lawsuit states that Ford deliberately miscalculated and misrepresented factors used in vehicle certification testing in order to report that its vehicles used less fuel and emitted less pollution than they actually did. The certification test related cheating centers on the “Coast Down” testing and “Road Load” calculations.

Ford miscalculated “Road Load,” which is a measure of those forces, defined as the force that is imparted on a vehicle while driving at a constant speed over a smooth, level surface from sources such as tire rolling resistance, driveline losses, and aerodynamic drag.

This measure of forces acting against the vehicle during real-world driving is critical to the simulation of actual driving when a vehicle is tested in the laboratory. Ford’s internal lab tests did not account for these forces, which lead to better—and entirely inaccurate—fuel economy projections, and claims that the vehicles emitted less pollution than they emitted in reality.

Hagens Berman believes Ford owners have the right to reimbursement for the premium price they paid for what they thought was a powerful, efficient and emissions-compliant option. Ford’s cheating renders these trucks out of compliance with federal regulations. Simply put, thousands of consumers did not receive what they paid for, and purchased their Ford Ranger or Ford F-150 under what we believe is false information that led them to paying more for fuel.

Hagens Berman is one of the most successful auto litigation law firms in the U.S. and is presently leading nationwide cases against Ford, Volkswagen, GM, Mercedes and Fiat Chrysler for use of emissions-cheating software. Our firm’s independent research outpaces even government agencies, and we are the only firm dedicating its own resources to uncovering new instances of fraud. Hagens Berman has also taken on other automakers on behalf of consumers throughout the United States for safety defects and negligence, and your claim will be handled by attorneys experienced in automotive consumer law.