LOS ANGELES – Honda is facing a new class-action lawsuit alleging the automaker knowingly sold its 2018-2019 Honda Odyssey and 2019 Honda Pilot vehicles with defective infotainment systems, which it refuses to fix, according to attorneys at Hagens Berman.

If you purchased or leased a fifth generation, 2018-2019 Honda Odyssey vehicle or 2019 Honda Pilot, find out more about the lawsuit and your rights.

According to the lawsuit filed Mar. 22, 2019 in the U.S. District Court for the Central District of California, owners of the affected vehicles report that the infotainment system – an integrated in-vehicle communication, navigation and entertainment system – behaves erratically, malfunctioning, freezing, and creating a safety hazard and distraction.

The defect can cause safety-related systems (including backup camera functions) to fail, and can create distracting random audio or video. The defect can also cause the entire center console to go black or blue while the vehicle is in motion, and cause navigation and other dashboard features to shut down completely while in use.

“Both NHTSA and many online forums are filled with consumer complaints about Honda’s defective infotainment system in the Odyssey and Pilot, with malfunctions beginning as soon as owners drive their car off the dealership lot,” said Steve Berman, managing partner of Hagens Berman and attorney representing Honda owners in the class action. “Our client’s vehicle has been serviced by Honda’s technicians eight times, and yet its infotainment system continues to malfunction. It’s clear to us that Honda is failing to admit this problem exists and failing to uphold its promises to consumers.”

The lawsuit alleges Honda breached its own warranty, stating, “Under the Vehicles’ New Vehicle Limited Warranty, Honda is required to ‘repair or replace any part that is defective in material or workmanship under normal use.’ But Honda has not found a solution to the infotainment system defect. Instead, Honda simply replaces defective parts with equally defective parts, thereby leaving consumers caught in a cycle of use, malfunction, and replacement.”

Reports to NHTSA call the affected model “obviously flawed,” and cite instances of the entire dash turning off while driving, including the speedometer. “As soon as I drove off the lot, the car gave me an error,” another report to NHTSA reads. Owners say Honda has offered no solutions.

The lawsuit against Honda seeks both monetary reimbursement for those who purchased or leased an affected Honda Odyssey or Pilot, and also seeks action from the court barring Honda from continuing to sell vehicles with the defective infotainment system.

The suit highlights that Consumer Reports downgraded its rating on the 2018 Honda Odyssey to “No Longer Recommended” due to “much-worse-than-average reliability, with problems including the infotainment display freezing and losing all functionality.”

“The only action Honda is taking is to conceal this widespread defect, which we find inexcusable given the risk of safety to Honda owners, and incurred expenses from numerous attempted repairs,” Berman said. “We believe it’s time for Honda to come clean.”

Find out more about the class-action lawsuit against Honda. 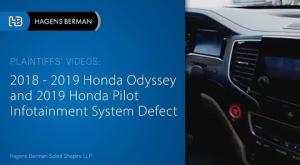 Honda is facing a class-action lawsuit alleging the automaker knowingly sold its 2018-2019 Honda Odyssey and 2019 Honda Pilot vehicles with defective infotainment systems, which it refuses to fix.