BOSTON – People living with diabetes have filed a groundbreaking class-action lawsuit against the three makers of analog insulin drug products – Sanofi, Novo Nordisk and Eli Lilly – for exponentially raising consumer insulin prices in an organized scheme to drive up prices at the expense of patients who need insulin drugs to live, according to Hagens Berman.

This first-of-its-kind lawsuit details several accounts from patients resorting to extreme measures to survive rising insulin prices, including starving themselves to control their blood sugars, under-dosing their insulin, and taking expired insulin. Other class members have intentionally allowed themselves to slip into diabetic ketoacidosis – a potentially fatal blood syndrome caused by lack of insulin in the body – so that they can obtain insulin samples from hospital emergency rooms.

“People living with diabetes are practically imprisoned under the price hikes and sadly are resorting to extreme measures to afford the medication they need to live,” said Steve Berman, managing partner of Hagens Berman, which represents the patients.

According to the lawsuit, filed Jan. 30, 2017, in the U.S. District Court for the District of Massachusetts, the three companies have exploited the drug-pricing system in a way that ensures higher profits for drug manufacturers and other players, leaving those living with diabetes crippled by high insulin costs. These acts, says the lawsuit, constitute a RICO enterprise, and violate the Racketeer Influenced and Corrupt Organizations Act and various state consumer protection laws.

The manufacturers of insulin even admit that their price hikes are unrelated to any jump in production or research and development costs, the suit explains.

The complaint states that this once affordable drug is now out of reach for many patients due to a behind-the-scenes quid pro quo arrangement: “increased benchmark prices are the result of a scheme and enterprise among each defendant and several bulk drug distributors. In this scheme, the defendant drug companies set two different prices for their insulin treatments: a publicly-reported, benchmark price and a lower, real price that they offer to certain bulk drug distributors.”

The most important of these bulk drug distributors are entities known as pharmacy benefit managers (PBMs). These entities serve as middlemen between health insurers and drug manufacturers, negotiating medicine prices with drug companies on behalf of health insurers. The PBMs also design drug formularies for their health insurer clients, ranking drugs based on efficacy and cost, the suit states. These formularies allow health insurers to funnel patients towards one brand of drug over others. Because the analog insulin products of the big three insulin manufacturers are largely interchangeable, these drugs companies fight for preferential placement on the PBMs’ formularies, offering PBMs “rebates” off their benchmark prices, according to the complaint.

The lawsuit explains that as compensation for their role as negotiator, PBMs pocket a percentage of the difference between the reported benchmark price and the undisclosed real price they are able to secure. This difference in prices is known as the “spread.” The larger the spread, the higher the PBMs’ profits.

“The drug manufacturer with the largest spread between benchmark and real price is more likely to secure a PBM’s preferred formulary position, and, as a result, the business of that PBM’s clients,” the suit states. “Where two or more drug manufacturers make largely interchangeable products, those companies would, in an ideal world, continuously drop their real prices to undercut the prices offered by their competitors.” But because of this two-faced public and private system, drug companies instead choose to hike their publicly reported, benchmark prices, while maintaining constant (or only slightly lowering) the real prices they offer to PBMs, the suit states. Instead of competing for PBM business based on significant real price decreases, the drug manufacturers have decided to compete based on significant benchmark price increases.

The lawsuit calls this trend of one-sided price increases “an arms race,” as each of the three defendants – Sanofi, Novo Nordisk and Eli Lilly – has raised its benchmark price in “perfect lock step” with its competitors to ensure that the large PBMs keep its drug in rotation. The lawsuit alleges that in a January 2017 statement, Eli Lilly admitted to the benchmark price – a net price scheme.

The firm says this arms race hurt patients – the plaintiffs here – who must pay for a high percentage of their drugs out-of-pocket. Uninsured patients and patients in high-deductible health plans, plans with high coinsurance rates, and Medicare Part D plans have been seriously injured by Sanofi, Novo Nordisk and Eli Lilly’s benchmark price hikes, according to the complaint.

“Insulin, in one form or another, has been available for more than a century, and it was formerly an affordable drug,” Berman said. “The only thing that has changed is the insatiable desire of Big Pharma to profit from sickness hand over fist.”

“It is our hope that this suit not only reclaims losses for the millions of U.S. patients struggling to survive with diabetes right now, but that it also shines a spotlight on an egregious scheme perpetrated by these defendants. It’s time to break up the Insulin Racket, and that is the objective of this case,” he added.

The lawsuit seeks to represent a nationwide class of consumers who have purchased analog insulin at recently skyrocketing prices, to reclaim economic losses in an amount to be determined at trial and to put in place an injunction halting this behavior.

About Hagens Berman
Hagens Berman Sobol Shapiro LLP is a consumer-rights class-action law firm with offices in 10 cities. The firm served as lead counsel in historic settlements involving inflated benchmark drug prices, including Average Wholesale Price MDL and a class-action lawsuit against McKesson Corp., one of the nation's largest drug wholesalers, recovering more than $500 million for plaintiffs. More about the law firm and its successes can be found at www.hbsslaw.com. Follow the firm for updates and news at @ClassActionLaw. 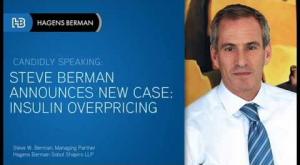