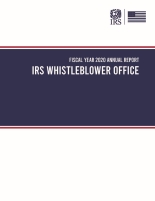 Hagens Berman, with over two decades of experience litigating some of the nation’s largest and most complex financial fraud cases, has an international team of attorneys. Our firm employs attorneys with accounting backgrounds, licensed CPAs, and certified forensic accountants. We have the expertise and resources to thoroughly investigate, develop, and advocate for your tax fraud claim.

In 1996, Congress passed the Tax Relief and Health Care Act which created a more generous whistleblower reward program under Internal Revenue Code § 7623(b). In particular, whistleblowers who have information about corporations or other businesses avoiding taxes or engaging in fraudulent tax activity can receive significant rewards under this IRS whistleblower law where the disputed tax amount exceeds $2,000,000.

If you have information regarding IRS fraud, you could be rewarded for reporting it. In general, if your information substantially assists the IRS in a successful tax enforcement action you will receive 15-30 percent of collected proceeds in the event the IRS recovers an amount in excess of $2 million, under the IRS whistleblower law. The percentage of the whistleblower reward is based upon the extent of your contribution to the IRS investigation and recovery.

If the information provided by a whistleblower to the IRS is “principally” based upon information already in the public domain, the IRS will pay you a discretionary amount up to 10 percent of the collected proceeds.

Under rulings of the United States Tax Court, monies eligible for payment to an IRS whistleblower include all “collected proceeds” of the action, including, among other things, net operating loss amounts recognized sometimes for several years.

A whistleblower who reports fraud to the IRS has the potential to recover tens or hundreds of millions or even billions of dollars to the government and also earn a reward for their information. When a whistleblower comes forward and acts on knowledge of tax fraud, it holds corporations and other businesses accountable for their deceptive practices and misrepresentation. Often, this information is only made available to a select few, making it even more important that IRS whistleblowers act on their knowledge of tax fraud, and choose a substantial, experienced firm to guide their claim.

What Tax Fraud Does the IRS Program Cover?

Tax fraud can occur across many different areas of the U.S. Tax Code (IRS Code), but the primary distinguishing feature of tax fraud is a taxpaying entity’s intent to defraud the government by not paying taxes that are lawfully due.

The IRS looks for solid information from a whistleblower—not an educated guess or unsupported speculation—involving significant federal tax fraud. The IRS has emphasized that whistleblowers should use the IRS’s whistleblower program to report significant tax issues, not to address personal disputes with a taxpayer or disputes about a business relationship.

Whistleblowers: know that various types of tax fraud are areas of focus for the IRS.  These include potential criminal violations for elaborate tax evasion schemes, misrepresentation of income, unlawful use of foreign tax credits, improper and unlawful reporting of transfer pricing information, improper deductions, misstatements and understatements of income and other information, various other accounting fraud violations.

The IRS has several operation divisions that handle IRS whistleblower complaints based upon the nature of the complaint. Most whistleblower complaints are handled by either the Large Business & International Division (LB&I) which handles complaints against taxpayers with over $10 million in assets or the SB/SE division that handles complaints short of that threshold amount. Cases with potential criminal liability can also later be referred to the Criminal Investigation division

If you believe that you have information about a corporation, an individual or other entity that is avoiding tax payments, you could be rewarded for reporting it.

The IRS will pay awards to whistleblowers who provide specific and credible information if the information results “collected proceeds, that is, taxes, penalties, interest or other amounts from the noncompliant taxpayer, where the amount exceeds $2 million. The IRS Whistleblower Office, which was established by the Tax Relief and Health Care Act of 2006, will process tips received from individuals who spot tax problems in their workplace or through expert analysis.

A whistleblower is rewarded between 15 and 30 percent of the total proceeds the IRS collects in an enforcement action if based on the information provided.

The Tax Relief and Health Care Act of 2006 made fundamental changes to the IRS whistleblower award program:

When a whistleblower is faced with the decision to report IRS fraud concerning their own employer or other taxpaying entity, the whistleblower must move to do so in a safe and smart manner, making it even more important to select a knowledgeable and experienced firm to guide your IRS whistleblower claim.

Becoming a Tax Fraud Whistleblower and Choosing a Law Firm

Hagens Berman helps IRS whistleblowers present specific and credible information to the IRS regarding tax fraud. With attorneys working internationally, a long history of litigating complex financial cases against some of the largest companies in the world, and several partners with backgrounds in tax, accounting, and whistleblower law, our firm has the resources and experience necessary to present even the most complicated forms of tax fraud to the IRS for investigation.

Building a strong IRS whistleblower case can prove difficult, as many cases and reported fraud brought to the IRS fizzle for various reasons. Nearly 60% of whistleblower cases filed with the IRS are rejected because the allegations are “not specific, credible, or speculative in nature.” There are literally thousands of claims before the IRS and not enough resources to investigate them all. The IRS process involves at least four layers of review that can take five to seven years or even longer to resolve. Hagens Berman has the capacity to develop and advance your claim as long as necessary and build a case that will make an impact.

In addition to the firm’s expertise in this area, Hagens Berman has worked alongside government officials and regulators for over 20 years, and is itself often retained by those governments, helping our firm establish the credibility necessary to bring important cases to the IRS. When Hagens Berman brings a claim, it gets attention.

Tax fraud is a complex subject, and there are many substantive differences between the IRS Whistleblower Law and the various other whistleblower programs and the False Claims Act (under which tax fraud cases may not be filed).

Because of these differences and essential procedural provisions, IRS whistleblowers should obtain the support of experienced legal counsel. Hagens Berman’s track record of taking on major corporations and the firm’s national reach, make us a valuable advocate to have on your side, if you choose to blow the whistle.

If you have knowledge of IRS or tax fraud or would like to discuss your whistleblower rights, you can contact Hagens Berman whistleblower attorney Shayne Stevenson at shaynes@hbsslaw.com or by filling out the form.

Hagens Berman represents several whistleblower actions under the IRS Whistleblower Program, and marshals its significant nationwide resources and expertise in financial fraud matters – including attorneys who are also accountants and licensed forensic accountants – to best present whistleblower matters to the IRS.

Questions? We can help.

Hagens Berman offers a confidential, complimentary, and secure case evaluation. If you have questions, speak with one of our whistleblower attorneys today.