Are you a resident of Sycamore, Illinois, who has been exposed to the city's discolored, lead-filled tap water?

The city of Sycamore should be held responsible for putting your health at risk and neglecting to maintain its deteriorating water system. Fill out the form to find out your rights to potential compensation »

Residents of Sycamore, Illinois, have sued the city in a class action, alleging that the city of Sycamore created a public health crisis through decades of negligence. The lawsuit states that the city allowed its water system to corrode and deteriorate to where hundreds of residents now lack one of life's most basic needs: clean water.

Many Sycamore residents have reported chronic health issues related to exposure to the city's water. Cancer rates are high, and some Sycamore residents have suffered from strange brain issues, the lawsuit states. Some young girls have reported losing hair, while other children exposed to the city's water exhibit abnormally aggressive behavior. Long-term effects can be worse, especially among children. Ingesting lead can hamper brain development and lead to impaired hearing, reduced physical height and learning disabilities.

According to the lawsuit, the overwhelming stench, taste and health risks of the municipal water force residents to cook and brush their teeth with bottled water. They also use bottled water for drinking, and some residents have gone so far as to use disposable plates and utensils due to the city water’s shocking ability to stain clothes, dishes and more with its reported red-orange color. As for its odor, it allegedly smells like sewage. Simply showering can stink up an entire home, attorneys say.

As the lawsuit notes, when Sycamore residents voiced concern over the safety of the city’s water in 2016, the city repeatedly replied that its water was up to Environmental Protection Agency standards and that the source of the problem was household water heaters or other home fixtures. This led some residents to purchase new appliances and other expensive replacement products, to no avail. In fact, the amount of lead in Sycamore's water supply was well beyond safe levels, and the city was aware that its system was in serious need of updating.

Instead of responding to its residents and fixing its water system, the city of Sycamore consistently puts off maintenance. The mains have deteriorated to the point where large amounts of iron are present in the city’s water supply, the complaint states. And when iron interacts with chlorine that the city treats its water supply with, it creates waterborne bacteria, which further imperils residents’ health.

Hagens Berman believes the city of Sycamore must take immediate action to fix this widespread issue affecting residents. The people of Sycamore deserve better. The lawsuit seeks monetary damages for affected Sycamore residents, as well as reimbursement for property repairs and the establishment of a medical monitoring program to provide health care and other services to impacted parties. The lawsuit also seeks to compel the city to establish an adequate system to control erosion and replace all water mains installed prior to 1960.

Hagens Berman is one of the most successful plaintiff litigation law firms in the U.S. and has achieved more than $260 billion in settlements for clients in lawsuits against some of the world's largest entities for wrongdoing and negligence. Your claim will be handled by attorneys experienced in civil rights law. The firm is also in the process of litigating a class-action lawsuit against the city of Chicago over elevated lead levels in its water supply, and has also taken on big corporations in Florida polluting residents’ air.

There is no cost or fee whatsoever involved in joining this action. In the event Hagens Berman or any other firm obtains a settlement that provides benefits to class members, the court will decide a reasonable fee to be awarded to the legal team for the class. In no case will any class member ever be asked to pay any out-of-pocket sum. 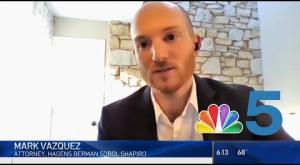 Residents of Sycamore, Illinois, filed a class-action lawsuit against the city claiming it knowingly failed to maintain its water supply that is now sickening locals.