Lordstown investors may have significant financial interest in a class-action lawsuit regarding Lordstown’s touting of phony orders for its EV trucks. Find out your rights »

Hagens Berman seeks to lead a federal securities class-action lawsuit on behalf of all investors who purchased shares of Lordstown Motors Corp. (“Lordstown” or the “Company”) securities between Aug. 3, 2020 and Mar. 24, 2021, inclusive (the “Class Period”). The lawsuit centers on Lordstown’s misrepresentations and omission concerning its demand and production capabilities for its EV trucks. The deadline for investors to seek appointment as lead plaintiff is May 17, 2021.

ABOUT THE LORDSTOWN INVESTOR LAWSUIT

Lordstown is an Ohio-based automotive company purportedly developing and manufacturing light duty EV trucks targeted for sale to fleet customers. The company has been developing its flagship vehicle, the Endurance, an electric full-size pickup truck.

“We never said we had orders. We don’t have a product yet so by definition you can’t have orders.”

Since going public via a SPAC, Lordstown has touted its growth prospects by consistently pointing to its book of 100,000 pre-orders. For example, on Dec. 23, 2020, the Company announced a letter of intent to sell 14,000 trucks to E Squared Energy, supposedly representing $735 million in sales.

HOW LORDSTOWN MISLED ITS INVESTORS

According to Hindenburg, the company’s claimed 100,000 pre-orders for its EV truck are, “largely fictitious and used as a prop to raise capital and confer legitimacy.” Hindenburg further cited significant, undisclosed production delays and a prototype that, “burst into flames 10 minutes before the test drive” in January 2021, substantiating claims by former employees that the company is not conducting the needed testing or validation required by the NHTSA. On this news, Lordstown shares fell by 17% in one trading day. 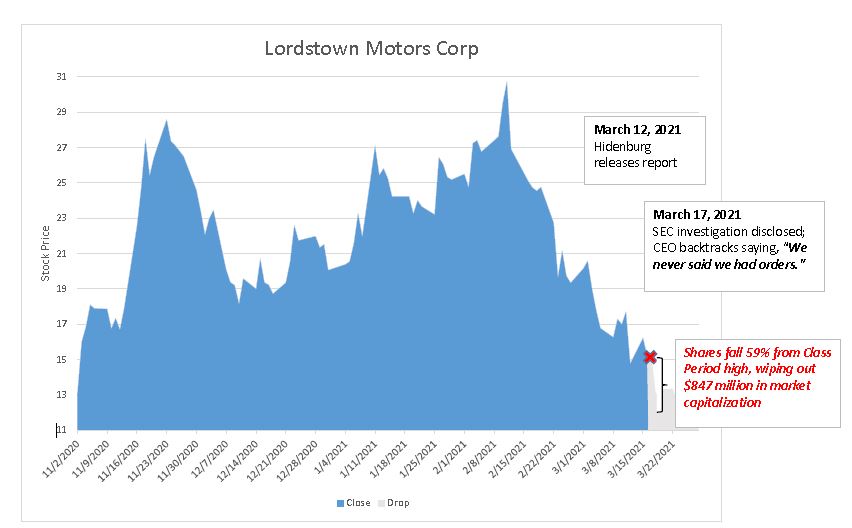 After the markets closed on Mar. 17, 2021, reports emerged that Lordstown is the subject of an SEC request for information and that the company’s Board has formed a special committee to conduct an internal review.

Before the markets opened on Mar. 18, 2021, Lordstown’s CEO, Stephen Burns, appeared on CNBC and stated “We never said we had orders. We don’t have a product yet so by definition you can’t have orders.” Lordstown shares fell approximately another 9% on this news.

Most recently, on Mar. 25, 2021, Lordstown filed its annual report disclosing that the SEC has instructed the company to turn over documents relating to the SPAC merger and pre-orders of its vehicles.

Investors who purchased Lordstown shares during the Class Period and have questions about your legal rights or possess information relevant to this matter, are encouraged to contact Hagens Berman attorneys at 844-916-0895, via email at [email protected].