ABOUT THE INVESTOR LAWSUIT AGAINST AMDOCS LIMITED

Amdocs investors may have significant financial interest in a securities fraud class-action regarding the accuracy of Amdoc’s reported financial results. Find out your rights »

Hagens Berman seeks to lead a federal securities class-action lawsuit on behalf of all investors who purchased shares of Amdocs Limited (“Amdocs” or the “Company”) securities between Dec. 13, 2016 and Mar. 30, 2021, inclusive (the “Class Period’).  The lawsuit centers on Amdocs’ alleged fraudulent accounting and concealment of known trends, including the deterioration of business in the North American market.  The deadline for investors to seek appointment as lead plaintiff is June 8, 2021.

ABOUT THE AMDOCS INVESTOR LAWSUIT

Amdocs, through its global subsidiaries, provides software and services to communications, cable and satellite, entertainment, and media industry service providers worldwide. Historically, the Company’s largest percentage of revenues come from its North American business, mostly the U.S., particularly from large customers including, among others, AT&T Inc.

Throughout the Class Period, Defendants made materially false and misleading statements regarding Amdocs’s business, operations, and compliance policies. Specifically, Defendants misrepresented and concealed that:

The truth emerged on March 31, 2021, when analyst Jehoshaphat Research published a scathing report entitled, “Where Did Amdocs’ Profits And Auditors Go?”, concluding that Amdocs is “a massive financial deception” and “the stock is uninvestable.”

Based on a review of Amdocs international subsidiaries’ filings overseas, Jehoshaphat claims Amdocs has overstated profits by as much as 50%.  Jehoshaphat’s claim was evidenced by steady parent profits despite declining subsidiary profits.

Jehoshaphat further alleged that Amdocs’ reported profit margins are “wildly” inflated, and approximately 1/3 of Amdocs’ stated cash is unavailable for use. Jehoshaphat stated that Amdocs “window-dressed” its balance sheets to keep its large borrowing a secret, namely by paying down its debt just prior to the end of each quarter, therefore showing a debt-free balance sheet on that day, before re-borrowing the money shortly thereafter

Jehoshaphat also raised concerns about the company subsidiaries’ auditor changes during the last two years, noting that there was a concerning pattern of reputable auditors resigning, only to be replaced by “scandal-plagued or tiny shops”.

Jehoshaphat further stated that its findings were confirmed by former employee and direct competitor interviews, who also noted that Amdocs was losing AT&T as a customer and “has been losing business for years but has made up for these losses by inflating financials, sometimes to a point beyond recognition by the country managers.” 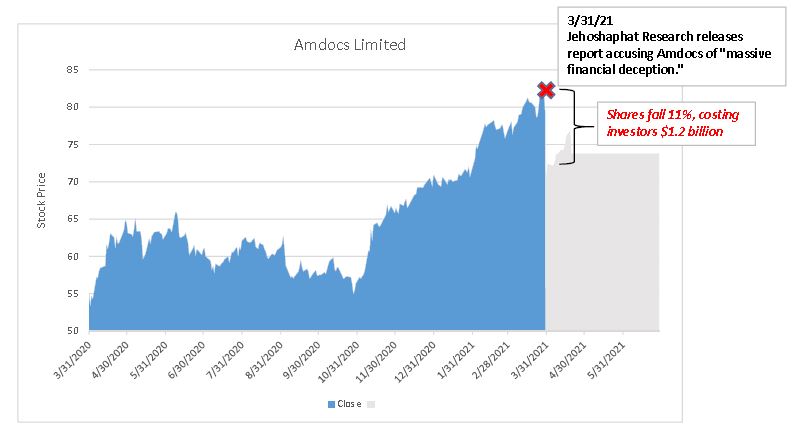